skip to main | skip to sidebar
"In contrast to the vitriolic rants you'll find on some political blogging sites, Palmer gives in-depth analysis and commentary." --Dan Cook, The Free Times

Lessons on Governance from the MA Senate Race 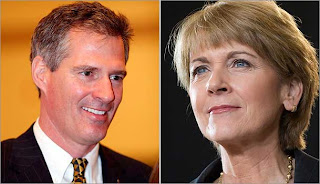 Polls in the Massachusetts Senate race are showing Republican Scott Brown leading Democrat Martha Coakley. The fact that a Republican has a legitimate chance of winning Ted Kennedy's former Senate seat in overwhelmingly Democratic Massachusetts has Democrats running scared because this could mean the end of health care reform.

A Coakley victory would maintain the Democrats' 60-seat supermajority that would allow them to continue to stop Republican filibusters in the Senate. A Brown victory, however, would put the health care bill in serious jeopardy by forcing Democrats to pursue one of the following options:

1. Force the Democrats to finish their negotiations before Brown is sworn in. This means Democrats only have a few days left in order to hammer out their differences. That's not enough time.

2. Find a Republican to provide the 60th vote. The most obvious candidate would be Senator Olympia Snowe of Maine, the most moderate Republican in the upper chamber. However, Snowe would be less inclined to throw her support behind a bill that even Democrats in nearby Massachusetts rejected by proxy. Another candidate would be Sennator George Voinovich in Ohio because he's retiring and has nothing to lose.

3. Have the House of Representatives pass the Senate bill as is. This means there would be no need for a conference committee or another Senate vote, thus meaning 59 votes are as good as 60 as far as this bill is concerned.

4. Use the budget reconciliation process to pass health care. This would only require a bare majority of 51 votes, but it would also blow up the Senate in that it would set a new precedent that Republicans would be certain to use the next time they regain control of the upper chamber.

5. Kill the bill. This would destroy Democrats because it Republicans won't give them any credit for stopping the bill and Democratic voters will have what little enthusiasm they have be knocked right out of them for the 2010 elections. Republicans would argue that even with their large majorities, they are incapable of governing. The Democrats won't be able to counter this. Even worse, losing health care would be a major defeat for Barack Obama because this is his last best chance of getting this bill passed. Passing health care will only be much more difficult with 53 or 55 Senate seats as opposed to 60.

But regardless of how the Massachusetts race turns out and which of the five aforementioned scenarios pans out, there are three major lessons that congressmen from both parties should learn. Democrats in particular should heed these warnings because, as the party in power, they have the most to lose in the next election.

1. Legislators should take their legislation seriously. Should Brown defeat Coakley in the Massachusetts race, one of the options available to Democrats regarding health care reform is to have the House pass the Senate bill as is. However, the Senate bill has several controversial provisions in it, such as the provision allowing Nebraska to have its Medicaid costs be covered by the other 49 states. This could introduce many legal challenges. The lesson for senators (and representatives) is to draft good and defensible legislation because you never know when you will have to rely on the bill you wrote. Relying on conference committees to make legislation more palatable may not be an option, as the current situation has proved.

2. Senate Republicans have set a dangerous precedent in that major legislation from either party will be impossible to pass in the future. Senate Democrats have had to almost exclusively rely on the votes of their own caucus in order to advance legislation because of unified Republican opposition. But if a 60-seat supermajority is required in order to stop a filibuster and advance any legislation in the Senate, then that ensures legislative paralysis. It is rare for any political party to have a 60-seat Senate majority. Should Republicans ever regain control of the upper chamber with 50-something seats, they will almost certainly regret the precedent they set with health care.

A lot of people are genuinely scared about what is happening in America concerning war, terrorism, the economy, the environment, immigration and the budget. They don't have the tools to tackle most of these issues on their own, so they need the government to help. But special deals and a lack of transparency have combined to present the government as not acting in good faith to help the public.

Republicans certainly stand to gain from the Democrats' political tone-deafness in 2010. However, the real threat lies in the potential rise of an independent or third party because Washington cannot continue to function this way.

Newer Posts Older Posts Home
Subscribe to: Posts (Atom)
Copyright 2007-2010 by Anthony Palmer. This material may not be republished or redistributed in any manner without the expressed written permission of the author, nor may this material be cited elsewhere without proper attribution. All rights reserved. The 7-10 is syndicated by Newstex.

My career goal is to become a political analyst or political commentator for CNN or MSNBC. I am also interested in teaching mass communication as a university professor. And in case my wanderlust gets the best of me, I would be happy to work for the Foreign Service in Japan or as a journalist at CNN's Tokyo bureau. Someday I may run for political office, but for now I'm content as a political observer.

If you wish to contact me, you can e-mail me at theseventen[-AT-]gmail[-DOT-]com.